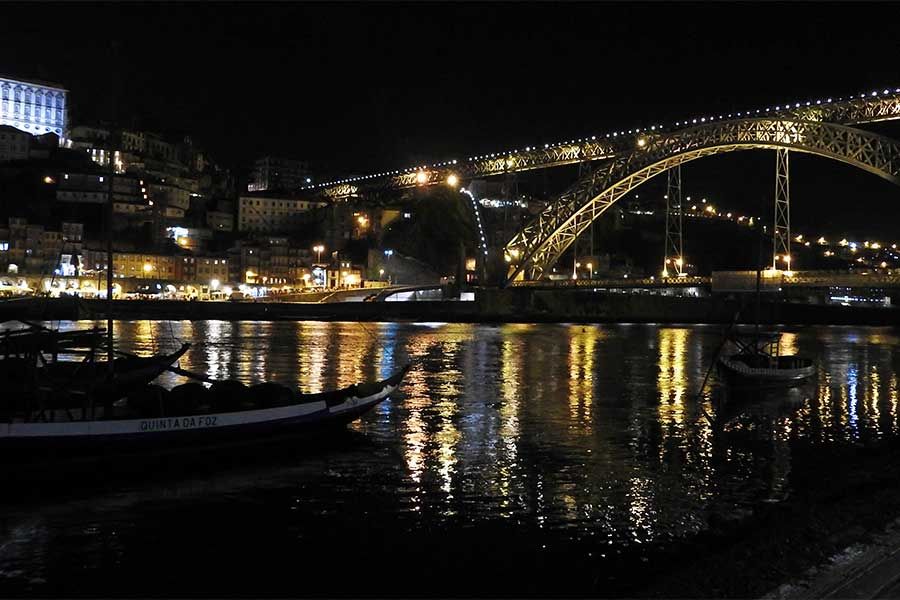 Should you wish to write a case study about how to build and run a great team, then look no further than the crew of Viking Helgrim. They offered an impeccable level of service and loved doing it. The vibrant relationship between the crew spilt over into the way they interacted with their guests, providing an easygoing fun atmosphere throughout the cruise.

Our bags were delivered to our well appointed balcony cabin within five minutes of arrival and soon we were sitting at the welcome reception with a white port and tonic plus cheese platter. Fortified and impressed by the decor of the ship, we were ready to explore the Douro River.

The Douro is about 557 miles long, with its source in north/central Spain. What was a treacherous river to navigate, has been tamed by the five dams along its length. Each dam generates “green” electricity, with passage via locks (the Carrapatelo lock being the deepest in Europe at 35m). So for us it was smooth sailing and time to enjoy the fascinating transits of the locks from the Sun Deck (even from the pool) or Aquavit Terrace.

These were also great spots to admire the magnificent scenery of pretty towns and villages, plus the vast steep terraces of the numerous vineyards along the river. For those that have been to Sri Lanka, the terraces are very reminiscent of the terraced tea plantations. There’s also plenty of wildlife to admire, the grey heron being my riverside favourite.

Understandably a constant thread throughout the cruise is wine production, for which this region is famous. We not only got to see the Quintas (estates) along the way but learnt how the quality of the grapes are tested, how mechanical feet have replaced human feet to press the grapes, plus how wines are produced, stored and bottled. The quality of the grapes (and the taste of the final product) is not only influenced by the soil and local climate, but by the roots drawing nutrients amongst Schist (not the local manure but a metamorphic rock).

Although Port is possibly the most famous product (some even believe Portugal’s name is derived from Port and/or Porto) other wines are produced in the region too. We enjoyed the opportunity to explore the Mateus Palace, famous the world over for appearing on the oddly shaped bottles containing Mateus Rosé. We also visited Favaios and learnt about the production of Muscat, a sweet wine, proudly produced in a very small town using innovative and highly automated processes. There are also a significant number of highly acceptable table wines produced in the region. Of course, it would be rude to visit all these fine establishments and not taste a selection of the output (it’s a dirty job but someone had to do it).

Perhaps the most memorable of these was the visit to Quinta da Avessada, where the tasting/drinking is accompanied by lunch. Each course is introduced by the highly entertaining owner who, as well as telling us the origin of the dishes, seems to have based his presentation style on Mr Bean.

Time to give the humble cork a plug (see what I did there). Around 50% of the world’s cork production happens in Portugal, where it takes the cork oak around 25 years to develop its useful bark for harvesting.

This cruise wasn’t all about drinking, oh no, there was eating to be done too. Breakfast, lunch and dinner are served in the single restaurant on board and it was an affair to be savoured. Each evening the Chef (great character) ran through his recommendation for dinner (at the end of the highly informative port talk by the Cruise Director). He discussed the origins of the dish, ingredients, how it was prepared etc. For the first time on a cruise I went with the Chef’s recommendation every night and was delighted I did so (there are plenty of alternative options).

Excursions were largely done by luxury coach, with air con, USB charging points and WiFi. Each group (bus) was led by an outstanding Viking guide, supported by local guides where appropriate. These ranged from a hat & cape wearing guide at the Sandeman Quinta (traumatised by being dive bombed by an errant bat), to the energetic guide in Salamanca (somewhat preoccupied by the local curiosity of a skull with a frog on the top), to the guide who shocked me by suggesting we try Ebola (he actually said Bolo de Laranja, a Portuguese pound cake, but I misheard him). Amusing moments aside, they were all excellent and informative guides and the QuietVox system Viking used meant the commentary was delivered gently into our earpieces.

Each excursion was enjoyable but arguably the most memorable were:

Castelo Rodrigo – a hilltop town with a maze of cobblestone streets and impressive views over the countryside from the Palace of Cristovao de Moura (ruins). Its rich history includes accommodating the Jews fleeing the Spanish Inquisition, with plenty of evidence of how the Christian, Jewish and Arabic communities lived together and influenced the town.

Vultures – a high viewing point gave us an impressive show of vultures soaring on the thermals above the valley, or nesting on the cliffs.

Salamanca (Spain) – home to one of Europe’s oldest universities, the students had the endearing honour to write their name on the University walls (in blood) once qualified. It’s known as “The Golden City” due to the yellowish glow of the sandstone used on the buildings. We really saw this in the magnificent Plaza Mayor, a bustling square surrounded on all sides by the most impressive architecture.

Porto – easily my favourite, Also a maze of cobblestone streets, impressive architecture and a magnificent cathedral. There are great displays of the famous Portuguese blue and white tiles, none more impressive than at the São Bento train station. The most impressive sight being saved for after dark, when the Luis I bridge lights are reflected in the water, illuminating the Barcos Rabelos (traditional boats once used to transport Port barrels) on the water.

Evening entertainment is modest (understandable with only just over 100 guests) but the music quiz night turned into a rockingly enjoyable affair, where staff and crew certainly “rocked the boat”.

This was undoubtedly one of the most enjoyable cruses we’ve ever taken and I would highly recommend doing a trip along the Douro with Viking.

I’d like to thank Viking Cruises for their support on this cruise.

To find out more, visit Viking.