You're here: Home / Articles / Le Treport and her two sisters

Le Treport and her two sisters 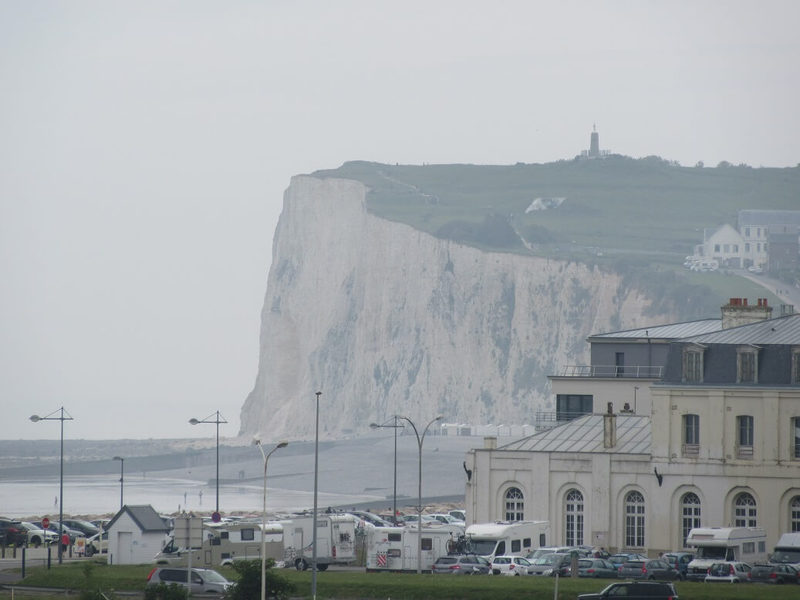 The coastal town of Le Treport, just inside the region of Normandy, is seemingly unremarkable at first sight. It is a little special though and lives with its two sisters of Eu and Mers-les- Bains. They all rest on the Channel shore line beyond the Somme basin.

Le Treport would be a wonderfully undemanding place to visit during the early summer.

Le Treport was established as a resort when paid holidays for French workers came into effect in 1936. It was the most accessible seaside destination for families travelling up from the industrial districts of Paris. It was attractive to ordinary visitors because holiday life there was inexpensive and the natural terrain provided a number of stunning spectacles. Everything is all still there and Le Treport remains very distinctive. The cliffs that embrace the town from both of its sides are the highest limestone and chalk features in Europe. They reach elevations of around 400 feet above the sea and their terrain dominates the shoreline.

The gap between the chalk edifices is dominated by the view of the Cathedral like structure of St. Jacques. This church rests on a gently sloping rock outcrop that seems to be timelessly permanent and unmoving. The proud tower points steadfastly upwards into the sky beyond the line of the cliff tops. Visitors can wander through St. Jacques and take in the majesty of the art works and architecture.

All sightseeing adventures in Le Treport though are hard work. Visitors will find themselves constantly climbing up and down steps and slopes that link the sea resort below to the high town on the top of the cliffs. Not the best activities for families perhaps on hot sunny days. Stay around the promenade and beach area during the sunshine. The town is one of narrow streets occupied by quaint buildings and a bustling market culture. Life for holidaymakers seems conventional yet strangely secure. The commercial life overlooking the sea is dominated by standing stalls, shops, cafes and restaurants.

The eating speciality in Le Treport is the home harvested fish produce that all looks so delicious. Fishing is very much a part of the home culture of the town. The dominant industrial activity has always been the commercial contribution of this fishing port.

Take a stroll towards the ancient lighthouse standing on a promontory poking out into the sea. Look close by and find the busy original fish market. Business is always brisk and the enclosed trading floor is always awash with people searching for their favourite varieties. The produce displayed in the trays on the stalls always looks sumptuously enticing. Remains of the early days of the fishing economy can still be found elsewhere in the town. The quarter des Cordiers still supports parallel rows of terraced cottages. These houses were occupied initially by fishermen who were so poor that they could not afford nets. They had to use long lines baited with local sea worms to ply their trade. The cottages are preserved as a monument to the original days of industrial poverty in Le Treport.

Just along from the fish market, around a bend in the shoreline, stands a different shrine to modern life. There is a rather grand casino to attract the hopefully still rich. When I looked at it around midday, not much seemed to be going on. Perhaps the casino was created as a pretentious imitator of a different culture that continues to throb merrily along in nearby Le Touquet. There is something else in Le Treport to attract holiday visitors. Across the road from the casino exists a most impressive funicular railway. It transits through an imposing tunnel cut into the vast face of the adjacent cliffs. It is there to transport people up from the beach area below to the high town at the top of the cliffs and back again. It runs continuously all day, each car holds about 10 people and it is free. Just join the queue and await your turn. It is an exciting experience and really not particularly scary.

The railway was built in 1908 before Le Treport began to come alive. It is perfectly maintained to this day and runs constantly with no interruption. The funicular traversers the steepest section of cliffs and the view of them is stunning. Visit them in the evening when they are illuminated to enhance their effect. There are a number of domestic houses located in the landscape at the top of the cliffs that present their occupants with a fabulous view overlooking the sea so far below. 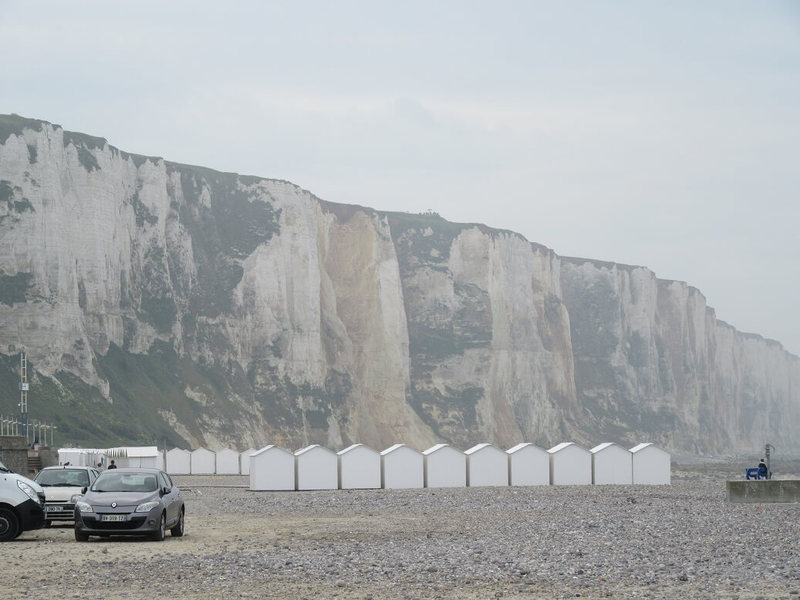 Back at the bottom again, along the beach, the pebbles make walking by the sea rather uncomfortable. At times of low tide though, smooth sand can emerge in certain sections.

Hotel accommodation in Le Treport is plentiful and generally inexpensive. I spent a night at the well signposted Golf Hotel, right at the top of the cliffs. This hotel rests within a beautifully tended and extensive garden. It is designed in classic Normandy style with a dark wooden beam construction. It has easy and plentiful parking spaces for cars and is located close to the cliff top stopping point of the funicular train. Leave your car up at the hotel and travel down to the promenade on the free train. Le Treport lies just off the stunning D940 coastal road and shares its pitch with the gentle towns of Eu and Mers-les-Bains. The towns together are known locally as the ‘three sisters’ and all are worth a visit. They all bear classic Normandy architecture that is characteristic of the region. The chateau at Eu is a distinctly impressive local feature.

Le Treport is unpretentious and displays its humble origins with pride. It is busy and vibrantly active in the summer yet has a gentle charm for all to savour and enjoy. Locate it on the map in the Seine-maritime department of Normandy.