You're here: Home / Articles / Cyprus – beyond the beach with Travel Editions

Cyprus – beyond the beach with Travel Editions 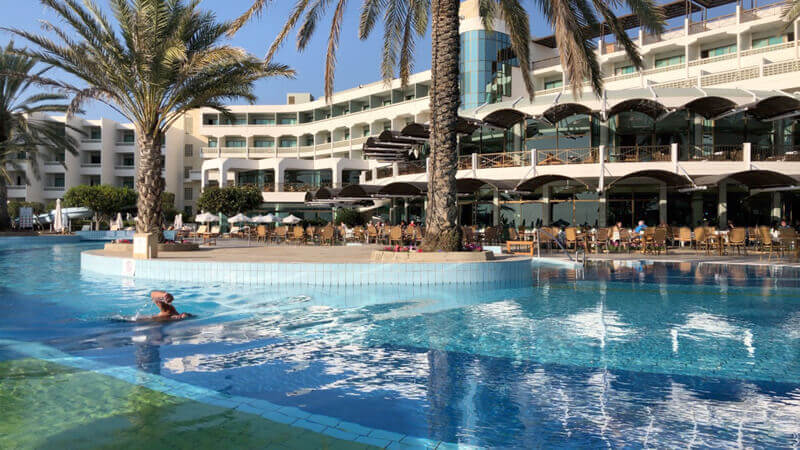 With a long season extending from early Spring right through to late Autumn, Cyprus is a great choice if you are craving some heat. Even through winter, the temperature on the coast rarely drops much below 15°C. But it’s not just about the sun, the island has always been popular with Brits not least because of its strong British connections – they drive on the left, the sockets are of the 3-pin variety and English is widely spoken. It’s a nice easy destination with a wealth of things to see and do, catering for all sorts of interests.

Travel Editions’ new ‘Cyprus Uncovered’ tour is based at the 4-star Athena Beach Hotel, one of four hotels in the quiet Kato Paphos area run by renowned Cypriot hoteliers, the Constantinou Brothers. It’s a slick operation across all four hotels which, between them, provide a staggering array of facilities for groups including competition level bowls greens and impressive ballrooms with sprung dance floors for social dancing or more formal instruction.

The Athena Beach centres around a particularly impressive outdoor pool, surrounded by comfy sun loungers and with gardens leading down to a narrow stretch of beach and the gently shelving bay which is perfect for swimming. I was there in late November and the sea was still a very pleasant 25C. There’s also an indoor heated pool, well equipped gym and the Elixir Spa offering a wide range of reasonably priced treatments. All the hotels are linked by a flat promenade walk, perfect for sunset strolls. For me, Paphos is the best area to be based and even more so since the city benefited from a major boost when it was designated a Capital of Culture in 2017. When I last visited in 2016, they were in the midst of construction projects in anticipation of that honour and frankly, the city was in a state of chaos. This time I was pleased to see, with all the work complete, the legacy is that the city centre is much improved and a very pleasant place to wander around. The long stretch of seafront promenade lined with restaurants, bars and shops is the main hub provides a lovely stroll down to the colourful fishing harbour and castle. As you walk around, look out for the dozen bronze sculptures that were installed as part of the cultural programme. The one by the castle, a serene looking woman leaning in to a rock entitled ’Sol Alter’ by Yiota Ioannidou is especially striking. Just around the headland from the castle is the UNESCO World Heritage listed Archaeological Park. Covering a large area, the park is still under excavation. You need a good couple of hours here to fully explore the wonderfully preserved mosaics of the House of Dionysos and Aion as well as wander amongst the ruins, take in the views from the lighthouse and explore the Theatre dating back to the 4th century BC.

A full day trip to Nicosia is another interesting city excursion. From Paphos it’s a pleasant 90-minute drive to get there including an interesting detour through one of the two British military bases on the island. Nicosia of course has the unenviable distinction of being the only remaining capital city in the world split by a border. Our guide provided not only the all important historical context that led to the Turkish invasion of 1974 but also shared some of the poignant human stories, the misery it has caused and the reasons (from the Cypriot perspective) why a settlement is unlikely to be forthcoming any time soon. A less sombre side of an excursion to Nicosia is to wander through the cobbled side streets lined with souvenir stalls en route to a delicious mezze style lunch. The city’s undoubted cultural highlight though is the Agios Ioannis Cathedral. Its a modest building from the outside but the interior will take your breath away with its amazing wall and ceiling paintings. And right next door is the Byzantine Museum packed with the most beautiful religious icons.

Two other full day scenic excursions are included in this Cyprus Uncovered tour. The first a drive up in to the Troodos Mountains and lunch in the lovely village of Omodos and time afterwards to wander through the narrow streets, explore the many craft and local speciality shops and absorb the contrasts of traditional island life versus the coastal tourist resorts. Another outing takes in the spectacular west coast of the island with its many vineyards and the Akamas peninsula, famously home to Aphrodite’s Baths (marginally more exciting than Aphrodite’s birthplace but both essentially rocks with myths attached!) The landscapes and views of the turquoise blue seas though are lovely and the fishing village of Latchi is a very pleasant spot for lunch.

These four included full day trips give an insight in to the many different faces of Cyprus, an island steeped in mythology and tradition. Balanced with 3 days at leisure to relax and enjoy the warm weather and hotel facilities, I’d say it’s a pretty perfect choice for a wintersun getaway.

Cathy travelled as a guest of Travel Editions and filmed the video below.